The surrealists recognized that not all surrealist art needed to be made by a surrealist. As a group they laid claim to many artworks and creative expressions that exhibited uncanny or dreamlike qualities. Segundo de Chomón was an early Spanish filmmaker working right at the turn of the century when film was still brand new. The surrealist latched onto his films as prime examples of their movement. In fact the surrealists were integral in finding and preserving many of Chomón’s films.

Most of Chomón’s films are simply light hearted experiments intended to explore the new medium of film. He churned out dozens of them and saw himself as Georges Méliès competitor. Both filmmakers were producing novelty shorts that depicted magical and fanciful themes. Given this new invention that could produce an illusion of movement it made sense that pioneers of the form would experiment with what other illusions the medium could produce.

Many of Segundo films were of magic acts aided by editing. They rely completely on the audience having no understanding of how film works. They are little more than novelties. However amidst the cheap thrills there are a few films that stand out. In 1908 Chomón made The Frog. It seems doubtful that he would have seen this film as special or different. It was yet another fanciful experiment, but its surreal qualities are immediately apparent.
​
The entire film is shot on a stationary camera. There are no pans, cuts, or changing of angels. This was how almost all movies were made at the time. In Segundo’s case it allowed for a myriad of special effects that relied on careful editing, or splitting of an image. The film has a rudimentary plot or better said, a chronological structure. A woman appears on screen next to a large, circular, fountain. The fountain is just a heap of stones with water spraying out of the top. She beckons and a human sized frog appears from behind the rocks. The film is basically the woman magically summoning a variety of spectacular things to replace the rocks.

The frog seems to be her audience. The inclusion of an onscreen audience is already an interesting device. Instead of the film being presented directly to the viewer, as was the norm, a fourth wall is erected where we are positioned as an outside observer spying on the activities.

There are two particularly striking images. The first is the frog circling around an enormous version of himself. It has that uncanny feeling the surrealists sought after. Chomón was most likely just playing around but this does not preclude the revelation of psychological themes, in fact a lack of intention is precisely what the surrealist believed would reveal the subconscious.

The small frog does not so much contemplate himself as run around the giant figure as if the two together are an illustration of a dream or mental state. It could be an image of narcissism, or of oppressive and intrusive thoughts. It could be about identity or existentialism. The image is open and waiting for associations.

The second image is of an enormous human head that appears in front of the frog. It is clown-like, with frizzy hair white make up and and big mustache. He is wearing a beanie on his head, or possibly a bowl or dish. There is a never ceasing waterfall that pour over his head and splashes all around. The head’s appearance is surprising. Even in a world of CGI it is an arresting image that makes you wonder how it was achieved. It must have been breath-taking to the 1904 audience.

The image is also a little frightening. Decapitated heads, no matter what they say or do are going to maintain a certain creepy factor. This one just smiles and regards the frog. Again there are many ways to interpret the image. Clowns are already figures that traffic in the absurd. The clown is unconcerned about the deluge he is suffering. He is an image of both tragedy and comedy.

After the giant frog and the clown comes a series of fountainesque tableaux vivant featuring men and women in elegant dress. They display spears and ride horses and are always surrounding the original woman from the beginning of the film who is at the center. After several different arrangements she kisses the frog and departs.
​
It is through the absence of camera movement, inter-titles, plot development or dialogue that the film remains open to interpretation. The Frog resonated with the surrealists because it created a magical space where logic was suspended to allow for an exploration of association and juxtaposition.

If you enjoyed this article click here for more
www.filmofileshideout.com/archives/favorite-scenes-no21-playtime 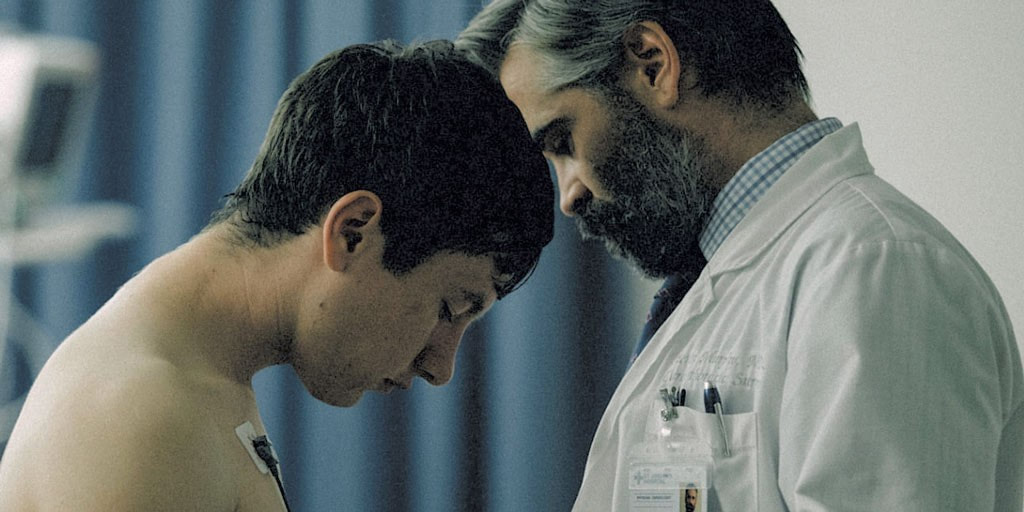 Yorgos Lanthimos' The Killing of a Sacred Deer